Photographs from his first body of work "Our Vision, Our Voices," 1993, and from "God's Will," 1994. Correspondence to and from galleries, publishers, and others about Cameron's work, reviews, fan mail, viewers' comments from a 1998 exhibit, magazines and books that feature his work, and postcards advertising various exhibits. Some personal material including an annotated high school yearbook (1976, Dover Arkansas), a 20th year reunion booklet, and family photos. Awards, including the 1997 FTM International Pride Award and 2 Lambda Literary Awards for "Body Alchemy" in 1996, one for Transgender and one for the Small Press category. Six videos, including "Transsexuals Speak Out," a "60 Minutes" segment, and "You Don't Know Dick." Paper copy of Cameron's 2001 online book, Man Tool, one of three, signed. Also, a 2002 resume; a printout of online interview of artist and exhibit curator Steve Compton from the Queer Arts Resource Forum; and a 2002 paper by Tee A. Corinne, "The Transiting Self: The Nude Self-Portraits of Transman Loren Cameron and Hermaphrodyke Del LaGrace Volcano," delivered at the College Art Association conference, February 21, 2002, as part of the session "How Do Lesbian, Gay, Bisexual, and Transgendered Artists Address the Nude?" Twenty 11"x14" silver gelatin photographs from Cameron's 1996 "Body Alchemy" project and text on foam core that accompanied their exhibit at Cornell University, April 19, 2002. Unbound copy of Cuerpos Fotografiados por Cameron Vols. I & II, dated 2003.

Female to male transsexual and photographer of transgendered bodies. Loren Rex Cameron is a native Californian. Self-taught as a photographer and artist, he began producing self-portraits and images of transgender people in 1993. By 1995 his work had been shown in solo exhibitions in San Francisco, Minneapolis, and Los Angeles. His first photographic book, Body Alchemy: Transsexual Portraits was published in 1996, winning two Lambda Literary awards (Inaugural Transgender Category and Small Press Category, 1997). In 2001, he published his second publication, an electronic book on the World Wide Web, Man Tool: The Nuts and Bolts of Female-To-Male Surgery (Zero eBooks). Cameron is celebrated for his seminal work of transgender self-representation in the photographic arts. As a guest speaker, Cameron lectures extensively throughout the United States at community venues, colleges, universities, and art schools. In about 2000, he started using his middle name Rex. 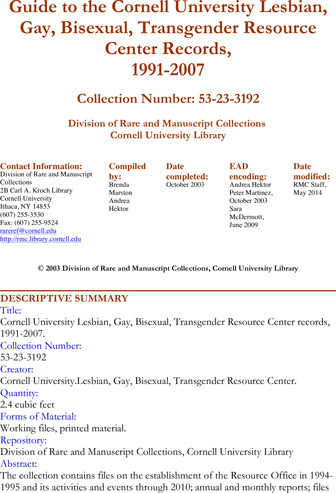 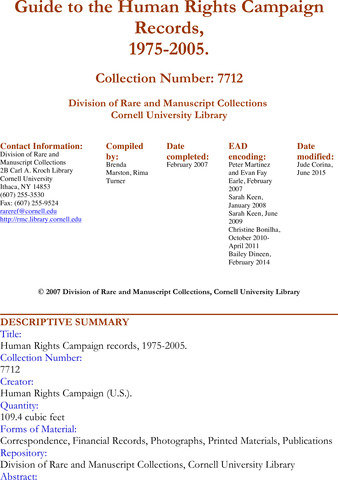 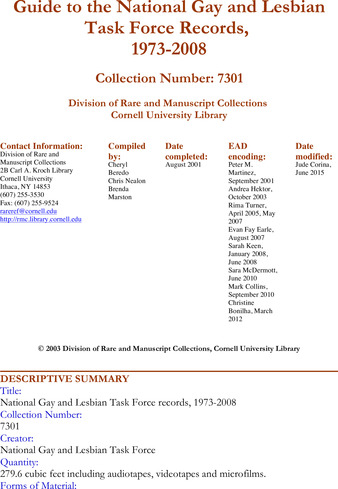 Guide to the National Gay and Lesbian Task Force Records, 1973-2008 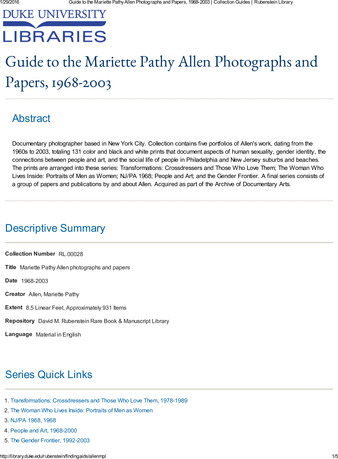 Guide to the Mariette Pathy Allen Photographs and Papers, 1968-2003 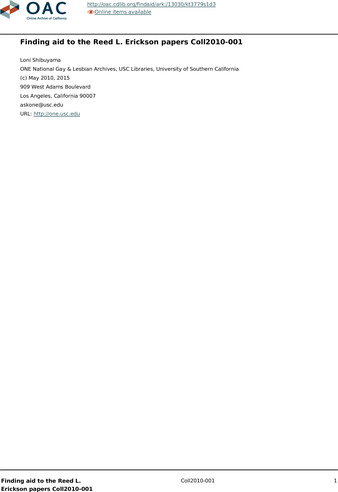 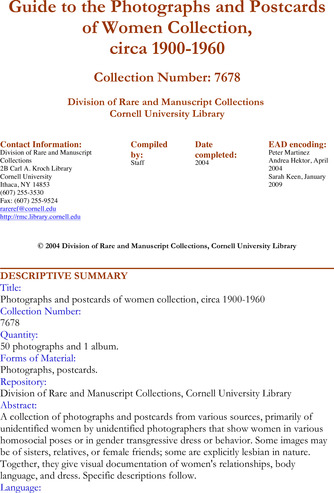 Guide to the Photographs and Postcards of Women Collection, circa 1900-1960